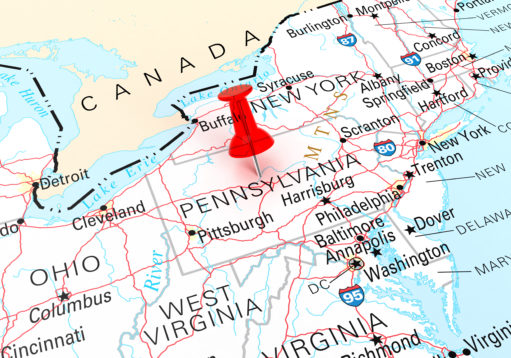 The Due Process Clause of the Fourteenth Amendment to the US Constitution limits the authority of courts to exercise jurisdiction over non-resident defendants.  Before a court can exercise personal jurisdiction over a party, the Constitution requires that the party have certain “minimum contacts” in the state where the court sits.  Jurisdiction may be satisfied  when the suit arises from the foreign person’s activities in the forum state.  Further, with respect to foreign companies, jurisdiction may be satisfied regardless of the nature of the lawsuit if the company has continuous and systematic contacts with the forum state or if it consents to jurisdiction there.  Courts have been divided, however, as to what actions by a company constitute consent to jurisdiction in the forum state.  For instance, does a foreign corporation’s mere registration to conduct business in a state satisfy the constitutional threshold?  In two recent decisions, the Pennsylvania Superior Court resolved that it does.

In Webb-Benjamin v. Intn’l Rug Group, decided on June 28, and Murry v. American LaFrance, decided on September 25, separate three-judge panels of the Pennsylvania Superior Court ruled that a foreign business that registers to do business in the state agrees to the possibility that it may be sued in the state.  In reaching this conclusion, the panel in Webb-Benjamin addresses the United States Supreme Court’s 2014 ruling in Daimler AG v. Bauman, which held that registration to conduct business in a foreign state does not amount to continuous and systematic contacts with the forum state.  The Webb-Benjamin panel, however, distinguished the Supreme Court’s ruling from instances where jurisdiction is established by consent of the foreign company.  With this distinction, the Webb-Benjamin panel held that registration to do business in Pennsylvania does constitute consent to be sued in Pennsylvania. Three months later in Murry, the court reached the same conclusion.

Businesses who register to do business in foreign states must be cognizant of the possibility that they may be subject to suit there – even if their contacts with the state are not continuous and systematic and even if the subject matter of the case does not relate to the company’s activities in the forum state.  To limit exposure, companies should carefully consider whether to maintain registrations in foreign states in which they are not actively doing business.  Companies who limit registrations to states in which they are actually operating will better preserve personal jurisdiction as a defense and potentially avoid costly litigation altogether.